After topping our group following a resounding 4-0 victory over Chelsea Ladies in the last Continental Cup game, Liverpool Ladies host Lincoln Ladies in the Semi Final at Halton Stadium on Wednesday 7th August.

Liverpool’s cup run so far has seen two victories, the previously mentioned 4-0 away at Chelsea and a 1-0 win over Doncaster Belles at Halton, and one draw against Everton Ladies. The Everton game being our first competitive fixture this season, the Ladies were unlucky not to take all 3 points.
http://youtube.googleapis.com/v/ChptjRC9pHI&source=uds
Against expectations Lincoln made it out of a very tough group, first off they fought it out against Arsenal at home to take a share of the points. Next up for the Lady Imps was a 1-0 victory over WSL leaders Bristol Academy and in their final group game they again drew 1-1, this time their opponents being Birmingham City.
Both teams lost their opening game of the second half of the season, Lincoln went 2-0 down with a goal either side of half time from Birmingham’s Mel Lawley. Lincoln did pull a goal back, former Liverpool striker Lillie Billson with a perfect pass to set up Carla Cantrell for the game to finish 2-1 to Birmingham.
Liverpool disappointingly also lost at home to a vibrant Arsenal side who looked hungry for goals. 2-0 down at half time, Natasha Dowie unluckily had a second half penalty saved by the Arsenal keeper. Jordan Nobbs scored her second and Arsenal’s third with a well taken strike.

Matt Beard handed Liverpool debut’s to new signings Sarah Gregorius and Kate Longhurst. Both looked bright after their introduction, Longhurst in particular impressed wearing the number 7 shirt. Another of Liverpool’s new signings made the bench for the game, young attacking midfielder Katie Zelem.
Lincoln have also added to their attack force over the break with 3 new strikers – Courtney Sweetman-Kirk, Aileen Whelan and ex-Red Lillie Billson. These added to Lincoln’s brilliant Jess Clarke and frontwoman Cantrell means they should score a few more goals during the second half of the season. 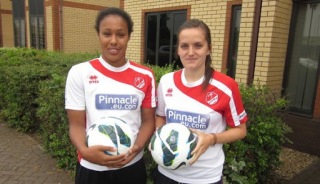 In our last head to head game Liverpool ran out 3-2 winners. The reds dominated the game for large periods with Natasha Dowie and Louise Fors both having a great game and scoring a goal each. Natasha also scored the only goal in a 1-0 victory over the Imps back in the first league game of the season.
Lincoln will be a tough team to beat, but Liverpool will be desperate to put the Arsenal defeat behind them and progress to the Cup Final – which will be played Friday 4th October. 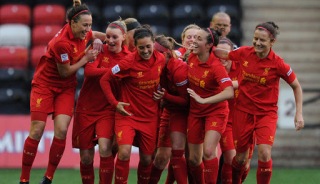 Kick off is at 7:30pm. Anfield season ticket holders get in for free, while Adult tickets are priced just £5 and concessions at £2.50. Tickets available on the gate.
Thanks for reading!
@LFCLadiesFans