Skip to content
Liverpool Ladiescontinued their unbeaten run with an FA Cup 5th round victory away at Sunderland Ladies this afternoon. The reds have won 5 out of 5 in 2014 so far and their last 12 games in all competitions since August 2013. 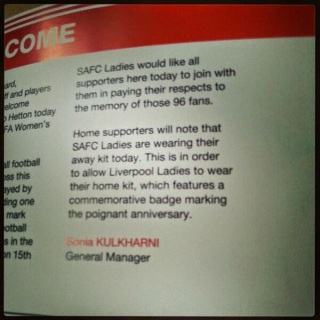 With Lucy Staniforth, Nicole Rolser and Katie Zelem already ruled out with long term injuries, the bench featured both Hannah Dale and Ashley Hodson from the development squad alongside Ellie Stewart, Danielle Gibbons and Corina Schroder. Unfortunately for Liverpool Amanda DaCosta picked up an injury during the warms up and was unable to play, leaving on crutches – the only low point of the afternoon.
Corina Schroder took her place in the starting line-up, with Martha Harris moving from left back into midfield. Harris more than impressed on her first competitive start for the club, tough to mark moving across the midfield and switching flanks with fellow new recruit Gemma Davison.

A third new signing goalkeeper Libby Stout also made her competitive debut, commanding her box and the defence well and making a fantastic save on the stroke of half-time – stretching to tip a shot over the bar.
Liverpool enjoyed the majority of possession, testing former keeper Rachael Laws who made a number of saves throughout the 90 minutes. Laws was a vocal presence at the back for the black cats and was one of their best players on the pitch.
After many attempts, Fara Williams going closest with a couple of long range shots, it was Martha Harris who broke the deadlock. Minutes after almost scoring herself Kate Longhurst did brilliantly on the right to get the ball into the box to Harris, who put the ball into the back of the net with a great left footed finish.
Longhurst had a great game playing just behind Natasha Dowie, showing her skills on the ball with a number of fancy turns!
Minutes after half-time came Sunderland’s best chance, Libby Stout came out of her box but was unable to clear and the Sunderland player attempted a shot on goal – luckily for Liverpool, Becky Easton got back to cover and headed away.

Natasha Dowie picked up where she left off last season, 19 goals in 21 appearances in 2013 and 3 in 4 during pre-season, Liverpool’s top scorer finished from just yards out when Sunderland failed to clear the ball from Longhurst and then Davison’s strike.
2-0 up Liverpool took control of the game, Corina Schroder pushing high up the pitch as the reds went in search of a 3rd. Schroder herself shooting wide after making a great run into the box.
Liverpool 3 youth players on the bench were each given their competitive debuts, Hannah Dale the first of the trio to take to the pitch and not looking out of place. Immediately Dale linked up with Natasha Dowie but her cross was unable to get to Harris, then moments later her chip to Dowie was almost returned to her by the striker but cut out by the defence.
Ashley Hodson then replaced Martha Harris and scored just minutes after coming on, unlucky for her as the goal was disallowed for offside. The final development squad graduate to enter the fray was Ellie Stewart, who has impressed throughout pre-season. Stewart was a late substitution replacing Becky Easton to partner Gemma Bonnerat centre back with Lucy Bronze moving out the right back.
The reds defence was solid throughout, though rarely troubled they dealt with anything sent their way with Gemma Bonner and Lucy Bronze forming a formidable partnership in the centre.

Overall a good performance from Liverpool, with so many players missing out through injury and missing two key players from last season – Nicole Rolser and Louise Fors. Liverpool are into the quarter finals with the draw to be made this week.
POTM: Martha Harris
Team: Stout, Easton (Stewart), Bonner (C), Bronze, Schroder, Williams, Omarsdottir, Davison, Harris (Hodson), Longhurst (Dale), Dowie
Next up we begin our title defence! On Thursday Manchester City will come to Widnes in a game that will be televised live on BT Sport at 6:30pm. I will have the match preview for this game up on Wednesday morning.
Thanks for reading!
@LFCLadiesFans