One week on from defeat at home to Arsenal, Liverpool Ladies travel to the North East to take on Durham WFC in the Continental Cup.

Liverpool’s run in the competition so far has seen a 0-0 derby draw against Everton Ladies, a 6-0 thrashing of Sunderland and a 2-1 loss away from home at Manchester City. With Durham and Doncaster Belles next Saturday being the reds last two group games before the semi-finals they must take maximum points to maintain hope of reaching the semi-finals of this competition for the second year running.

On Sunday against Arsenal, Liverpool were unlucky in front of goal; both Natasha Dowie and Amanda DaCosta heading wide in the first half. They were even more unlucky to concede the way they did, the ball knocked in the back of the net by Casey Stoney following a tussle in the 6-yard box.

Katie Zelem made her long-awaited competitive début for Liverpool, the young midfielder missed the first part of the season with a broken collarbone and slotted comfortably into the midfield alongside Fara Williams and Amanda DaCosta.

While one player returns from injury, another sat the game out – goalkeeper Libby Stout failing a late fitness test. In Stout’s absence Danielle Gibbons once again made the step up to deputise, impressing with a number of saves from Danielle Carter.

Kate Longhurst and Becky Easton also picked up injuries during the game, while Nina Frausing made her Liverpol début following her summer move. Frausing immediately immersed herself into the game, playing in midfield and creating chances for fellow substitute Claudia Walker and Natasha Dowie.

Lucy Bronze also created chances throughout the 90 minutes, playing the majority of the game at right-back and pushing forward up the wing. Bronze almost found herself on the score sheet, testing Emma Byrne from 25 yards with a ferocious strike that the Arsenal keeper only just tipped over the crossbar.

Liverpool’s opposition on Sunday currently sit bottom of the Women’s Super League second division, following a 2-1 defeat at the weekend to Oxford United. On-loan reds left-back Megan Alexander featured for Oxford during the game, helping them to the first win of their campaign.

Like Liverpool, Durham have seen a couple of players miss games through injury. Louise Fellows made her WSL début on Sunday on her return from injury, while Ellie Christon also made her first appearance in 6 weeks after picking up an injury against Everton in the same competition. 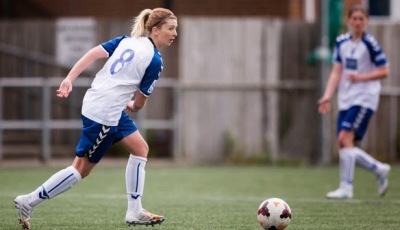 Durham’s top scorer this season is midfielder Caroline Dixon who has 3 goals in 9 games. New signing Emily Scott from Middlesborough also scored on her début against Oxford.

3-0 down, Durham pulled a goal back through débutante Stacy Crooks but Claudia Walker re-extended the reds lead just before half-time. The second-half also seen a whole host of chances, mostly created through Megan Alexander who also got herself on the score sheet. Ashley Hodson netted Liverpool’s 6th and Crooks scored her second of the game just before the final whistle. Read the full match report here: Liverpool Ladies dev. squad 6 – 2 Durham WFC.

The game will not be live on television however you should be able to listen to commentary online. Last week Durham announced via their website that all remaining home games would be broadcast live at www.dhradio.org.uk.

If you are travelling to support the reds at the game kick off is at 2pm, Sunday 6th July, Durham play all home games at New Ferens Park and you can purchase tickets at the turnstiles for £4 adults – children’s tickets are free.

In other news this week, on-loan Liverpool midfielder Louise Fors has announced her decision to take a break from football. Fors was sensational for Liverpool last year and a massive part of our league winning campaign. Read the club’s official announcement here and Fors’ interview on her decision here.

In better news, Liverpool trio Martha Harris, Ellie Stewart and Katie Zelem have each received England call-ups for the upcoming U20 World Cup in Canada. England are in Group C and will face South Korea on 6th August, Mexico on 9th August and Nigera on 13th August.

Claudia Walker also received an international call-up and will feature for England in the UEFA Women’s U19 Championships in Norway. There England will face Sweden on 15th July, Republic of Ireland on 18th July and Spain on 21st July.