This Saturday Liverpool Ladies play their final Continental Cup group game at home against Doncaster Belles. The reds sit second in their group and there is still a chance they can qualify for the semi-finals of the competition as best runner-up from the three groups.

Last weekend away at Durham WFC, Liverpool at first found it difficult to convert the many chances being created. Leading goal scorer Natasha Dowie ensured the reds went in at half-time in the lead and doubled her tally after the break during a second-half where Liverpool ran riot.

Ellie Stewart came on for the second-half, a substitution that seemed to allow Lucy Bronze and Corina Schroder to push higher up the pitch to devastating effects. Bronze was lethal during the final 45 minutes, providing a hat-trick of assists as Liverpool put 6 past the Durham defence.

Katie Zelem was also a stand-out player throughout the 90 minutes, having only made her competitive début for Liverpool 7 days earlier the young midfielder scored twice. The second goal displaying excellent determination as Zelem had three attempts on goal in quick succession, eventually putting the ball in the back of the net.

Zelem could be the missing link in the Liverpool midfield; over the last couple of matches the reds struggled to find the final ball to Natasha Dowie up front, but with Zelem linking well behind the striker with both Schroder and Gemma Davison plenty of opportunities were created. Dowie‘s second goal coming after a nice passing move between Zelem and Schroder.

Doncaster Belles return to Widnes on Saturday after also paying Liverpool a visit during pre-season, the match report for Liverpool’s 1-0 that night can be found here. Ellie Stewart with the deciding goal in that game.

Since then Doncaster have enjoyed a successful start to life in Women’s Super League 2. The Belles currently sit second in the second tier of women’s football after opening their campaign with 5 wins and a draw.

During those 6 games they have scored 15 league goals, conceding 4. Sue Smith is their overall leading goal scorer on 6 for the season so far, Leandra Little and Jessica Sigsworth just behind her on 5 and 4 respectively.

One result that stands out from Doncaster’s Continental Cup games so far, is their 2-1 victory over Manchester City. Last season it was controversially announced that Manchester City were to be awarded a place in the top tier of the WSL, while Doncaster Belles would be forced to play for promotion in the league below.

Doncaster will be missing both Jemma Purfield and Ashleigh Mills for this cup clash, the duo along with Liverpool’s Claudia Walker are with England U19s ahead of their UEFA tournament next week.

The Belles enjoy fantastic travelling support from their noisy fans and it will be great to welcome them back to Select Stadium on Saturday! That said, their bells coupled with the Liverpool supporters hooters will not make a pleasant noise so here is your 2 day warning to bring cotton wool – I know I will! 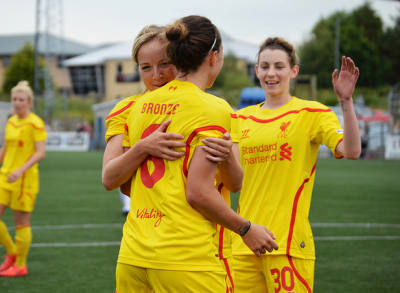 The game kicks off at 6:30pm this Saturday 12th July. Admission on the gate will be £5 adults and £2.50 concessions, if you buy in advance online from here these prices are reduced to £3 adults and £1 concessions while Liverpool supporters in possession of an Anfield season ticket as always are granted free entry to all home games.

Finally over the next month a number of Liverpool players are due to be involved in international tournaments with England. First up will be Claudia Walker who has been named as part of the England squad for the UEFA Women’s U19 Championships in Norway. Their first game will be on Tuesday 15th July, make sure you’re following on twitter to find all scores and you can also bookmark this blog which will be updated following each game. Walker will be unavailable for Liverpool  for at least the next three games – missing Doncaster Belles, Everton and Bristol Academy away.

Thanks to Tim Hickman for allowing the use of the photos he took at Durham last Sunday to be used on the blog, for the full set click here.