Against all odds and in the most emphatic fashion, Liverpool Ladies retained their Women’s Super League title yesterday with a 3-0 victory over Bristol Academy. 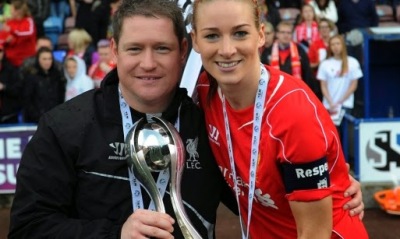 Beginning the day in 3rd place in the league – Liverpool needed to win to give themselves any chance of lifting the trophy at the end of the day, while Chelsea had to lose and Birmingham could lose or draw.
Nicole Rolser made her first start in over a year for Liverpool, following a couple of impressive appearances off the bench in the preview two games. Nina Frausing kept her place at centre-back, as did Gemma Davison on the right behind Natasha Dowie.
If the reds were feeling any fatigue from their midweek outing in the Champions League it did not show, as they did everything but score in the first-half. Liverpool had 14 shots in the first-half alone. 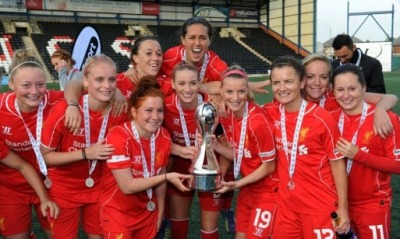 Katrin Omarsdottir was the first with a chance, Fara Williams corner headed on towards the Icelandic by Gemma Bonner but her diving header was saved.
Corina Schroder had a fantastic game on the left, almost scoring a first-half free kick from 25 yards out – the strike on target but punched away by Mary Earps. Schroder was also creating chances for her team mates, working well with Williams in setting the midfielder up from a long shot which dipped but went over the crossbar.
As Liverpool pressed forward attacking the Bristol defence, news filtered in from the other games – Notts County and Manchester City both taking the lead over the reds title rivals.

Natasha Dowie was the next Liverpool player to see a shot blocked, 2 in quick succession from the edge of the area.
For all the attacking movement, one player stood out in defence – Nina Frausing. With Liverpool pressing so high up the pitch, Bristol were looking to catch the reds on the counter attack but each and every time during the first 45 minutes it was Frausing who was back to clear, dispossess and shield the ball out from the attack.
Somehow the teams went in at half-time level, with neither side breaking the deadlock.
Liverpool re-entered the pitch a few minutes early for the second-half, once the game had re-started it seemed as though the second 45 would be the same as the first – with the reds doing everything but scoring.

Shots were cleared off the line before Lucy Bronze’s header hit the crossbar, Gemma Davison’s performance hit another level as the majority of the Liverpool attacks began to come from her surging runs down the right wing and cutting into the box.
It was Natasha Dowie who eventually broke the deadlock, putting Liverpool ahead after expertly putting the ball past Earps. Dowie had an exceptional second half today, pressuring the defence and chasing every ball, urging her team mates around her on.
Lucy Bronze then doubled Liverpool’s lead after signature run into the box along the touchline, scoring from an impossible angle to make it advantage Liverpool in the title chase.

Fara Williams added the 3rd from the penalty spot after Natasha Dowie was fouled, the reds no.4 has chipped in with a couple of vital goals this season and completed the scoring at Select Stadium – ensuring that Liverpool had done all they could to give themselves the best possible chance.
The few minutes between the Liverpool game ending and waiting for the full-time scores from both Chelsea’s and Birmingham’s game were agonizing and euphoria struck supporters and players as confirmation came through that somehow, somehow all 3 results had gone the reds way and they were once again Women’s Super League Champions.
POTM Nina Frausing/ Natasha Dowie
XI Stout, Bronze, Bonner (C), Frausing (Easton), Schroder, Williams, Katrin, DaCosta, Davison (Longhurst), Rolser (Harris), Dowie
An absolutely unbelievable day supporting the reds, this one will take a while to sink it. To come from such a difficult season, fraught with injury, go into the final day in 3rd and walk away with the league title is an exceptional achievement and all credit to the players and staff.
For a more in-depth look at the season, my Season Review will be online next Saturday. On Thursday night Liverpool take on Linkoping away in the Champions League, so the review will be online when I’m back from that.
As ever, thanks for reading these reports/ following on twitter and facebook. Bring on the 2015 season!
@LFCladiesfans