Tomorrow Liverpool Ladies return to action in their first (open to the public) pre-season friendly.

For the second year running the reds welcome Aston Villa to Widnes during pre-season, in March last year it was in fact the visitors who took the lead – defender Jade Richards scoring from a free kick. This lead however was to be short-lived as Fara Williams seen her set piece bundled over the line shortly before half-time and Katrin Omarsdottir netted the winner in the second-half.

Villa have had a quiet transfer window so far, completing one signing with Katie Wilkinson re-joining the club. Wilkinson spent the latter half of the last campaign on loan at the midlands side, scoring 6 goals in 13 appearances. They also boast England youth international Sherry McCue amongst their ranks but have lost forward Carly Davies, who has left the club after 13 years.

For supporters of Liverpool Ladies this friendly offers the first opportunity to see the club’s four new signings play for the first time. Defenders Satara Murray and Ingrid Ryland, forward Line Smorsgard are all in line to make appearances. Liverpool could also reintroduce last winter’s signing Lucy Staniforth to the side after the midfielder missed the entire 2014 season through injury. 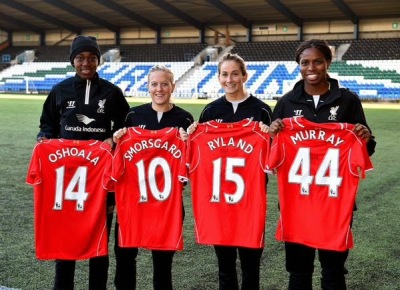 At times last season Liverpool struggled in front of goal, scoring just 3 goals in their opening 5 competitive games. Smorsgard coming in will no doubt boost the reds attack, as will the return of the fit-again Nicole Rolser who was sorely missed last season.

Rolser returned for the final four games of Liverpool Ladies season, scoring in the 3-3 draw away at Arsenal and instantly rekindling her on-pitch chemistry with the reds top scorer Natasha Dowie. Dowie scored 19 goals in 2013, her partnership with Rolser a key part of Liverpool’s attack and while the no.9 still hit double figures last year it was clear she missed the service Rolser consistently provides.

In defence Liverpool have been boosted by the news both captain Gemma Bonner and left-back Corina Schroder have signed new deals. The most likely candidate to partner Bonner at the back is new arrival Satara Murray who comes to Liverpool from the University of North Carolina, the college which Whitney Engen and Lucy Bronze both played for.

Other returning players include Becky Easton, Libby Stout, Katrin Omarsdottir, Fara Williams, Kate Longhurst, Danielle Gibbons, Martha Harris and Katie Zelem while Claudia Walker, Hannah Dale and Ashley Hodson will all likely feature once again for the first team in the upcoming friendlies and season – the trio all gained valuable playing time during the 2014 season with Liverpool relying on their talented youth players to fill the gaps left by the unprecedented injury crisis.

Ashley Hodson in particular has noticeably improved, bagging 4 hat-tricks in 7 appearances for Liverpool’s development squad in their season so far. Hodson also captained the team during a 10-0 thrashing of Durham WFC, scoring 4 times.

Other development players who could make the step up and feature in the first teams preparations for the upcoming campaign include development team captain Shannon Beckwith and attacking midfielder Mollie Green. Beckwith is a solid centre-back who communicates well with her defence, reads opposition attacks well and is comfortable with bringing the ball out from the back while Green has been around the first-team before, featuring on the bench in last year’s cup defeat away at Manchester City.

Liverpool have many more talented youth players amongst their ranks and the development squad are currently on a 10 game winning streak. Read more on the development squad’s 2014/15 season so far here. Other players to watch out for over the next year are England youth international Maz Pacheco, Emilie Revitt and Olivia Wild – all part of the defence which has conceded just one competitive goal all season with impressive young goalkeeper Rachel Darbyshire between the posts.

The game will be played at Select Stadium, Widnes. Entry is free and kick off at 2pm.