Nastasha Dowie was on the score sheet once again on Wednesday evening as Liverpool Ladies booked their place in the Continental Cup quarter-finals, beating Sunderland Ladies 2-0 in Widnes. Dowie also provided the assist for Katrin Omarsdottir’s 90th minute strike to seal the victory for the Reds. 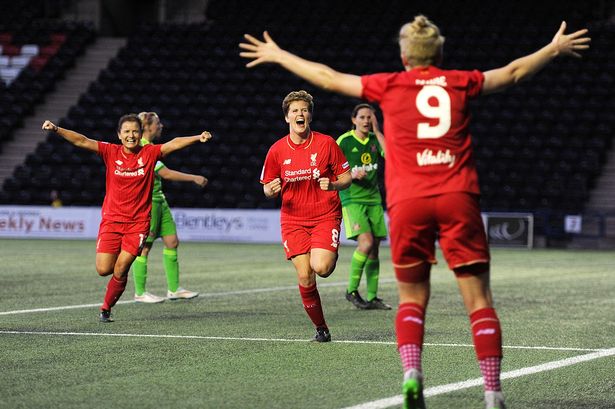 Liverpool’s impressive defensive back line remained unchanged, Libby Stout in goal behind Martha Harris, Gemma Bonner, Becky Easton and Mayumi Pacheco – recording their fourth straight clean sheet of the competition. In midfield Omarsdottir came in for Lucy Staniforth, who was sitting this one out through illness, alongside Katie Zelem and Kate Longhurst with Rosie White, Ashley Hodson and Dowie up front.

The Reds have enjoyed an upturn in form recently and from the opening whistle dominated their visitors, who were not helped by being forced into an early substitution after Vicky Williams collided with her own player and was replaced by Vicky Greenwell.

Dowie has scored in each of Liverpool’s cup wins so far and was involved in the thick of the action once more; cleverly flicking Harris’ throw to the feet of Zelem, whose low drive from just inside the area was collected at the near post by Hilde Gunn Olsen in the Sunderland goal. The no.9 was then the target for Harris’ probing ball into the 6-yard box, Olsen stretching to tip the ball away minutes before Dowie would head narrowly wide from Bonner’s pinpoint forward pass – this after Pacheco’s cross had been cleared.

Liverpool continued to pile on the pressure, pressing through the excellent work rate of Longhurst and Hodson and passing the ball around well, never allowing the frustration of being unable to break Sunderland down affect their play; the Reds were also quick on the counter attack, Zelem and White combining, with the latter sending a through ball straight past the centre backs and Zelem chasing but Olsen was wise to the danger and came off her line to halt the run.

With the score tied at 0-0 despite a high amount of chances for the home side, Sunderland’s Beth Mead appeared to get around the back of the Liverpool defence. Poised to shoot on the 18-yard box, Easton swooped in with a feracious block to deny Mead and send the ball out for a corner – which came to nothing.

The game somehow remained goalless at half-time despite Dowie hitting the crossbar, White seeing her rebound strike from Zelem’s blocked header cleared off the line and Omarsdottir having a free kick deflected by the wall.

Sunderland’s chances were few and far between during the first 45 minutes, and defeat here would end their hopes of finishing in the top 2 of the Continental Cup group and automatic qualification for the quarter-finals. So it was no surprise to see them coming out fighting during the second half.

The introduction of Abbey Joice early in the half gave the Black Cats more of an attacking edge, however twice as Joice squared the ball in towards Brooke Chaplen the former Everton midfielder could only send her shots over the crossbar. Mead also continued to be denied, first by Bonner who blocked a shot and then by Harris who put an end to her run down the left wing and forced Sunderland to retreat.

As the Liverpool defence stood strong, Dowie and White together won a corner, the resulting set piece swung in by White – who had taken over duties from the sidelined Staniforth – and Dowie heading over the line from 2 yards out to give the Reds a deserved 1-0 lead.

Easton produced another of her now classic sliding tackles to prevent Sarah McFadden continuing her run, while Bonner continually tidied up at the back – stopping Chaplen’s low ball all too easily. Stout was also twice called into action, first to collect Rachel Furness’ tricky low strike and then expertly tipping Mead’s goal bound effort over the crossbar.

With the game entering the final few minutes, Liverpool won another corner which White once again stepped up to take; Dowie had positioned herself parallel to the 18-yard box and upon receiving the ball short from White, played a one-two with Bonner before crossing to Omarsdottir at the back post who could make no mistakes smashing the ball pas Olsen to secure the 3 points and the quarter-final spot for the Reds ahead of their final group fixture away at Manchester City on Sunday.