OVER 1,000 supporters were in attendance at the Select Security Stadium, Widnes to watch Liverpool Ladies knock Merseyside rivals Everton Ladies out of the Continental Cup. 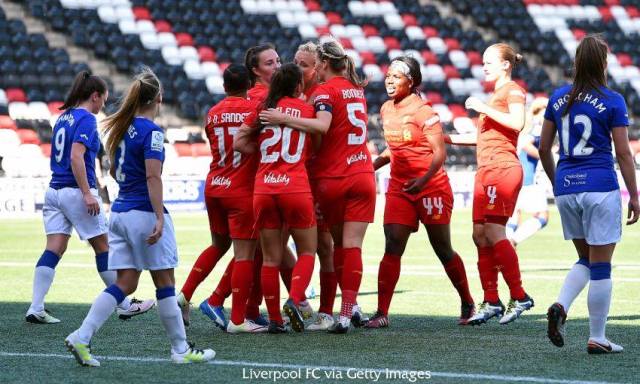 A scrappy opening to the game seen chances for either side sparse before Emma Lundh caused chaos inside the 6-yard box on the stroke of half-time, rising highest and appearing to head the ball past Kirstie Levell.

The forward has since declared on her Twitter account that she didn’t get the final touch, attributing the goal to Blues defender Dan Turner.

Scott Rogers had made several changes to the team that drew away at Manchester City; the back line remaining unchanged with Siobhan Chamberlain behind Satara Murray, Gemma Bonner, Sophie Ingle and Alex Greenwood.

Mandy Van Den Berg returned to the starting 11 in defensive midfield and was joined in the centre by Katie Zelem and Caroline Weir – the Scottish international playing a slightly deeper role than of late.
Lundh also started alongside Tash Harding and Shanice Van De Sanden in attack.

Having missed the opening 10 minutes due to the revised kick off time and heavy traffic, my first taste of derby day action was rather subdued – although I’m reliably informed Murray made an impressive early challenge to prevent Rosella Ayane getting a shot in when the on-loan Chelsea youngster was through on goal.

The Blues went close again when another loan signing, Chloe Kelly of Arsenal making her debut, won possession deep in the Liverpool half and hurriedly fired a shot at goal that was easy for Chamberlain to collect.

Liverpool chances flowed through Greenwood, both her delivery from open play and set piece a source of opportunity for her team mates.

Centre back pairing Ingle and Bonner both connecting with corners yet Ingle was unable to direct her header on target and Bonner’s attempt was gathered by Levell.

From open play Greenwood had also found Weir in the box, Harding neatly flicking the ball onto Weir but Everton’s Turner blocking her ball towards Zelem who had surged forward to aid the attack.

Then Greenwood herself almost capitalised on good wing play by Van De Sanden, the no.11 had cut in from the right to send a pass to the left back 20 yards from goal. Greenwood struck the ball well and was denied only by the leaping Levell who punched her shot over the crossbar.

Everton’s greatest chance of the game came as Kelly twisted and turned inside the Reds penalty box, squirming away from her marker to shoot from 10 yards out – Chamberlain quick to react and palming the effort away.

The Reds took the lead shortly later as Lundh was the only red shirt amongst a sea of blue inside the 6-yard box as Greenwood’s delivery from a corner dropped in the middle; Lundh jumped and seemed to get the final touch, yet the goal will likely go down as a Turner own goal.

Neither Lundh nor Turner returned with their respective sides following the break, Rosie White on for Lundh and Turner replaced by Ellie Stewart.

It’s fair to say that Murray has enjoyed a fine run in the side this season, this her fourth consecutive start on the right of the defence. In the first half the American had been penned back in her own half, yet as Everton faltered she was able to move higher up the pitch.

Dispossessing a blue shirt of the ball just inside the Everton half and carrying the ball high up the pitch, the final cross intercepted before it could reach a team mate.

Liverpool dominated proceedings in the second half however were unable to capitalise with a second goal, Greenwood once more refused a goal against her old club by Levell and then White fizzing a chance wide after being put through by the left back.

Levell made it a hat trick of impressive saves shortly after the hour mark, stopping Ingle’s effort at point blank range.

Controversy then reigned as former Reds defender Stewart received her marching orders for a challenge on Van De Sanden.

Everton were down to 10 as Liverpool continued to see the game out with ease, into the final minutes of the game Harding showcasing her pace after tapping the ball wide to Greenwood, receiving it back to nudge it around the Blues right back – her final ball stopped by the defence.

There was time for one more Everton chance, another ex-Liverpool player Claudia Walker letting a shot fly from 20 yards but luckily for her former club this went inches wide and the Reds progressed into the quarter-finals.

PLAYER OF THE MATCH: Alex Greenwood