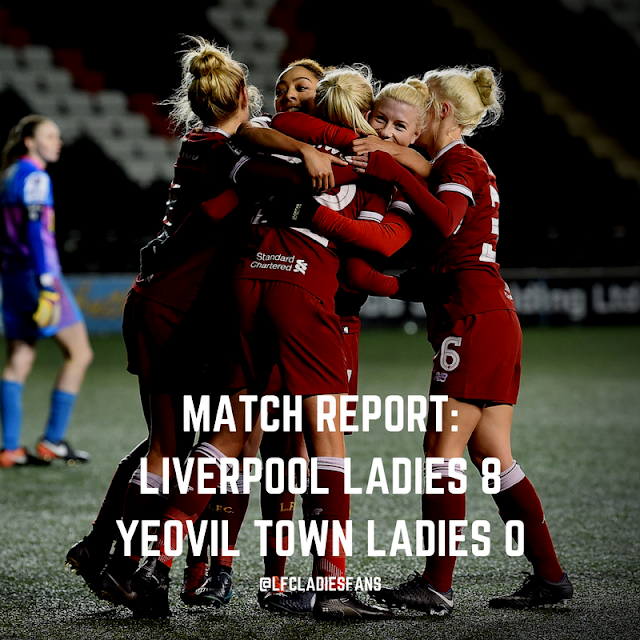 LIVERPOOL Ladies enjoyed a storming start to 2018 on Saturday evening as they put Yeovil Town Ladies to the sword. The unrelenting Reds put eight past their visitors from the South West with on-loan forward Bethany England scoring four.

The other goals were shared between Caroline Weir, Jess Clarke and Laura Coombs plus an own goal from Yeovil defender Ann-Marie Heatherson who turned a cross from Weir into her own net.

On an evening with many highlights it was perhaps the biggest of nights for Amy Turner. The Liverpool defender signed from Notts County during the Spring Series and having spent 15 months on the sidelines injured, was named amongst the substitutes and came from the bench to a great reception to mark her comeback.

England led the line for the Reds supported by Ashley Hodson and Clarke, Weir and Coombs were joined in midfield by Sophie Ingle and the largely untroubled defence consisted of Alex Greenwood, Casey Stoney, Gemma Bonner and Martha Harris with Siobhan Chamberlain in goal.

Despite the one-sided scoreline Yeovil had defended well in the opening stages of the FA Women’s Super League tie, in the opening ten minutes alone both Weir and Clarke were denied by Glovers goalkeeper Megan Walsh. Clarke dazzling as she skipped past several players, exchanging passes and then seeing her final shot pushed around the post.

The visitors also showed promise going forwards however Nadia Lawrence found herself dispossessed deep in the Reds half by England, who had tracked back and won the ball.

Liverpool continued to look dangerous as they grafted to find the opening goal. Coombs in particular a stand out, especially during the opening twenty minutes of the half, controlling the tempo from the middle and encouraging the full backs to press high up the pitch.

Coombs played an excellent ball that picked out the run of Harris who in turn looped a cross in towards the 6-yard box yet Walsh came off her line to punch clear.

Moments later the Reds broke the deadlock, Yeovil’s Heatherson unfortunate as she stuck a leg out in an attempt to clear a cross from Weir that ended up in the back of her own net.

If the first goal could be considered unfortunate for the Glovers, the second was certainly scrappy for Liverpool.

Clarke had forced her way into the area and her shot deflected onto the knee of England who doubled the lead a yard from goal.

With five minutes to go until the break England added a third, latching onto Ingle’s superb through ball and closing in on goal. Just when it looked like the defender had got back in time to block any effort, England dragged the ball back onto her right foot and slid a cool finish under Walsh.

On the stroke of half time Chamberlain was called into her first action of the game, Gemma Evans free kick initially striking the wall yet falling back to her. Evans then struck a fierce drive at goal which Chamberlain did well to get down and smother, preventing the visitors from pulling a goal back.

Out for the second half there was no let up from the Reds, Clarke striking the post with the first attack and Weir further extending the lead with the second.

It was a trademark left-footed wonder goal from outside the area from Weir that made it four-nil. The Scottish international exchanging passes with Coombs and Ingle before turning away from her marker and firing the ball home without even looking up.

From Weir’s goal on 51 minutes the Reds scored four goals in nine minutes; England completing her hat trick with a cheeky chip over Walsh, Clarke tapping the ball over the line from close range and England converting a pass from Greenwood in the 60th minute.

The Reds had barely stopped for a breather, leaving Yeovil stunned and the scoreline at a whopping seven-nil.

Following her fourth goal of the night England was substituted to a rousing reception, replaced by Kate Longhurst. Liverpool’s no.7 making her 50th league appearance for Liverpool Ladies and almost marking it with a goal of her own – a left-footed shot just wide of the post.

Turner also replaced Stoney with twenty minutes to play, making her welcome debut for the club after a long fifteen months out injured.

The scoring wasn’t over for the night as goal number eight was scored by Reds number eight, Coombs capping her fine performance with a deserved goal – Clarke with the assist.

PLAYER OF THE MATCH: Bethany England