Skip to content
On Thursday evening Liverpool Ladies will face Everton Ladies in the final derby of the 2014 season.

Everton Ladies have been in dire league form so far this season. The blues are the only side in the Women’s Super League that have failed to pick up a win, with a record of 6 defeats and 2 draws. Everton have lost their last 4 league games, conceding 10 goals and scoring 4.

Despite this Liverpool’s Merseyside rivals enjoyed a brilliant cup run during the first half of the season, beating Cardiff City, Liverpool and Notts County to put them in their second FA Cup final in 4 years. In 2010 Everton had Natasha Dowie to score their extra time winner, however this time fell to a 2-0 defeat to Arsenal with goals from Kelly Smith and Kinga.

Nikita Parris took over the no.9 shirt at Everton following Toni Duggan’s departure to Manchester City, also taking over the mantle of being the blues top scorer with 8 strikes to her name in 14 appearances so far. One of those goals came against Liverpool in the 2-0 defeat earlier in the season, however in the 2 derbies since Gemma Bonner has kept Parris at bay and limited her chances.

With 2014 being the first year promotion and relegation has been introduced to the WSL, Everton are fighting for their lives. They currently bottom of the league, 5 points behind Notts County with 6 games left to play. 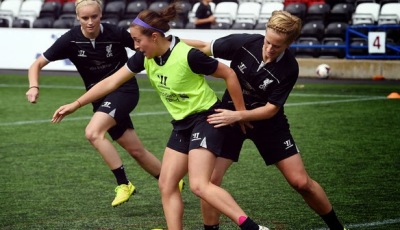 In contrast to Everton, the reds have won 6 out of their 7 last games. Lucy Bronze has yet again been a top performer for the team, driving forwards from right-back and seemingly thriving under the new system preferred by manager Matt Beard – with 3 centre backs, Bronze and Corina Schroder at wing-back.

Corina Schroder was the stand-out player during the derby win in July, setting up the winning goal after brilliantly holding off 3 Everton players to get a pass to the waiting Natasha Dowie who provided the assist for Kate Longhurst. Schroder also linked up well with Longhurst in defence as Liverpool eluded and frustrated Nikita Parris throughout the 90 minutes.

Liverpool have been forced to work hard to pick up points this season, while the goals were free-flowing at times last year with the departure of Louise Fors and injury to Nicole Rolser the reds have faced tough games against Notts County and Everton – in 3 games played, Liverpool picked up 7 league points scoring just twice. Libby Stout the difference between the posts with 6 clean sheets in 9 appearances.

Form always goes out the window in derby games, Liverpool are chasing back-to-back titles and Everton are battling to escape relegation making this tie a must-win for both sides.

With Liverpool Ladies the away side in this encounter, tickets will be priced £5 adults and £2.50 concessions. Kick off is at 7:30pm, Select Stadium, Widnes.