Earlier tonight Liverpool Ladies were held to a 2-2 draw at Everton Ladies, elsewhere in the title race both Chelsea Ladies and Birmingham City picked up maximum points in their games – leaving the reds 4 points from the top of the league with 3 games to play.

It was Liverpool who enjoyed the majority of the possession during the opening 20 minutes, working well down the left flank with both Gemma Davison and Corina Schroder beating the Everton defence to get crosses into the 18-yard box. There was no red shirt on the end of Davison’s cross, Natasha Dowie got on the end of Schroder’s ball only to find her shot blocked.

A couple of early Everton attacks were comfortably dealt with by Liverpool, the now familiar sight of Libby Stout coming well off her line to clear from a long ball forward headed for Nikita Parris. Parris also intercepted a Fara Williams pass, Gemma Bonner well alert and on hand to win the ball back and press forward.

Katrin Omarsdottir and Amanda DaCosta were pulling the strings in the Liverpool midfield, Katrin with a great ball forward to the waiting Kate Longhurst on the edge of the area and DaCosta putting in another good shift for the reds constantly driving forwards and trying to create opportunities.

Shortly after a Liverpool attack that seen each of Dowie, DaCosta and Williams have shots blocked, Everton caught the reds on the counter attack with Nikita Parris forcing Libby Stout into punching the ball out for a corner. The resulting corner was swung into the back of the net by Danielle Turner to give the blues the lead.

On the stroke of half-time, Gemma Davison played a through ball to Natasha Dowie who comfortably finished past Rachael Brown to equalise for Liverpool and score her 5th goal against Everton in two seasons.

Kate Longhurst was the reds derby hero back in the 1-0 win in July and doubled her goals tally for the season just minute after half-time. Dowie with a brilliant touch for Longhurst to latch on to and finish with ease past the keeper.

Unfortunately for Liverpool, their joy at taking the lead was short lived as Nikita Parris scored a well-taken goal from outside the box to make it 2-2. 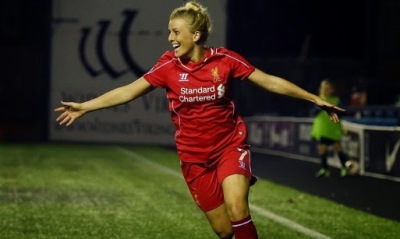 Longhurst and Dowie’s partnership up front was one of the highlights for Liverpool supporters, the two almost combining to score the winner in the final ten minutes as Longhurst headed Lucy Bronze‘s cross onto Dowie. Liverpool’s leading scorer had the ball in the back of the net but the linesman flagged for offside.

Late in the game Parris received her marching orders for a reckless challenge on Becky Easton, who had replaced Katrin Omarsdottir allowing Fara Williams to move forward into midfield. Katie Zelem and Ashley Hodson were also late substitutes, coming on for Gemma Davison and Kate Longhurst.

Williams saw a 90th minutes free kick blocked by Everton defender Gabby George and Amanda DaCosta grazed the crossbar from the edge of the area.

The point gained sees Liverpool drop to 3rd in the league, with a massive game away to Birmingham City up next for the reds. Everton remain rooted to the bottom of the table, 5 points from safety.